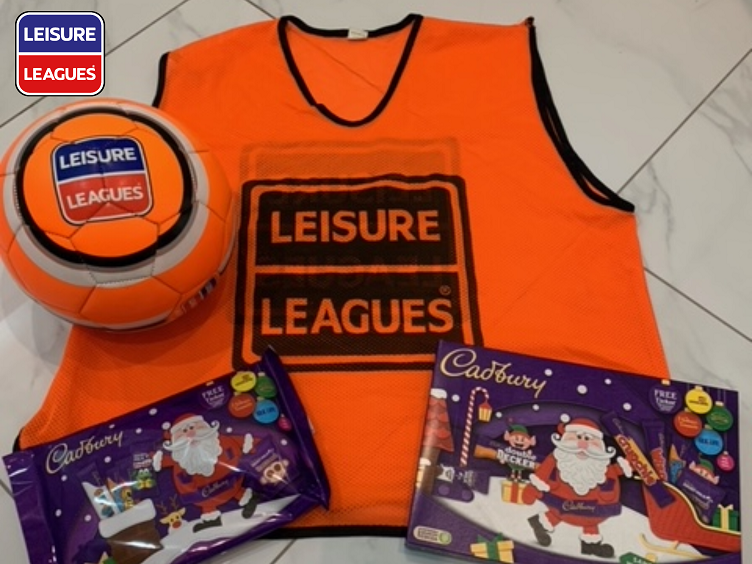 Children in a Hospice in Lancashire will be having a brighter Christmas thanks to the generosity of our players and league staff.

Award winning referee Simon Mahomed recognised the unique ability of football to help in society and as a keen supporter of the Derian House Hospice in Chorley, he hatched a plan.

“I asked myself what can we do to help people in our community that is easy to achieve and everyone can participate in?” the altruistic official explained.

There was collaboration between Simon and the Lancashire Area Manager, Lee Martin, who is the Leisure Leagues Partner in the Preston and Chorley areas.  “Lee got behind it too, and messaged all the teams. We used our social media to raise awareness too.”

Simon praised the response, saying: “The lads play every week, why not ask them to bring a selection box per player, 6 players per team 18 teams equates to 108 boxes, that’s just on a Monday night in our league alone. It’s less than £1 per person and easier than asking for donations.”

He will now take the boxes to the children in the hospice, which as Leisure Leagues’ Andy Thorley said, was particularly poignant at this time of year: “Seeing these ill children is especially heart-breaking at Christmas, and it’s absolutely brilliant that our players and Simon, the ref, have been able to bring just a little bit of cheer to them.”

As for Simon, he’s already planning his next charity drive, as he shared: “Although I have worked with and been a great supporter of Derian Hospice, there are so many worthwhile organisations I would love to support and help and Easter will be the next campaign for our leagues.”

He recognises too that our 6 a side community leagues can play a key role – and are about much more than sport, suggesting: “If we can make a parent, child or a family member smile and let them know that people are thinking of them we have achieved something great and which shows that we are more than just about playing football.”

A sentiment that Andy agreed with: “We know the importance that our leagues bring to the people that play in them, for many it might be their only exercise and the only team sport they play from week to week. How wonderful it is that they can come together and help others.”

Derian House’s mission is to help children and young people, whose lives are too short, to make happy memories in an environment of fun, respect and above all, high quality care. The care they provide is free for families, but services cost £5 million to run every year with only 12 per cent of funding we need coming from the government.

Wherever our leagues are in the country there will be a similar organisation near you, and as Simon added: “We can all make a little difference if we try.”

Leisure Leagues is only 6 a side leagues provider to donate money to charities and good causes, including Cancer Research,  The Dogs Trust, National Blind Children’s Society, and Molly Olly’s Wishes.