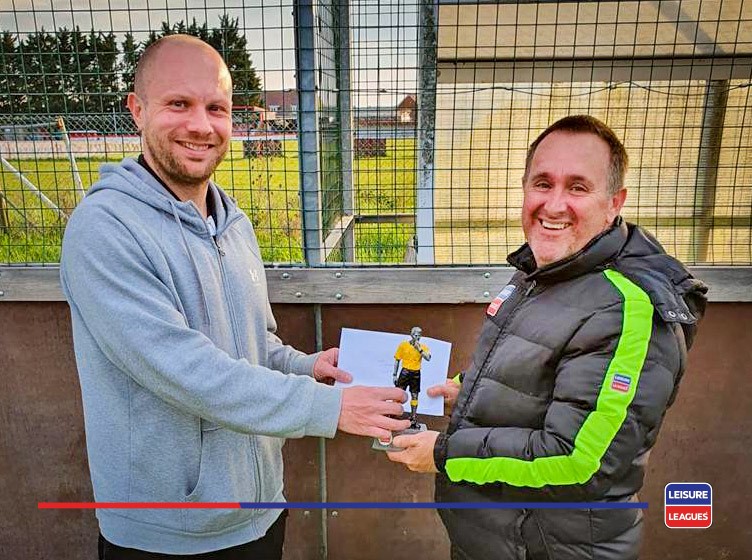 Dave Jukes, who has been acting as a referee in our leagues on the Isle of Wight for ten years and last week clocked up the 500th night of his career, saying: “I never expected to be doing that many!”

Indeed, if you ask Dave how many games he’s done in that time, he laughs: “I don’t know! It must well over 1000 in the middle, and when you add in the nights I supervise, I dread to think!”

Midlander Dave, who has lived on the Island for twenty years joined us in 2012, after what he terms as a “spell with another company” ,but added: “the difference with Leisure Leagues was incredible”.

The Leisure Leagues competitions have become a real sporting event for the footballers on the Island, and Dave has been a massive part of that – a fact he plays down, praising instead “the wonderful team who work with me,” adding: “We’ve got a fantastic team of six refs. We all get on really well and the players know they can’t get away with anything! We have to keep it fun for everyone. We tell them all ‘just enjoy it!’

“That goes for us too – of course we just try and be invisible. I supervise the nights at some leagues, and I ref at others. It’s brilliant!”

As well as his work with Leisure Leagues, Dave is no stranger to football generally on the Isle Of Wight,  officiating on Saturdays, Sundays and Youth football, as well as his trio of nights with the community in the 6 a side leagues.

He says the 11 a side leagues had struggled to attract referees, but that situation is changing now, and that football was “thriving, which is brilliant.”

Dave was presented with a memento to commemorate his 500th night by Leisure Leagues Area Manager, Rich Scott, and Rich says it was well-deserved: He’s been with me since I took these leagues on in 2016. He’ll go a whole year without having nights off!”.

Rich also paid tribute to Dave’s personality, as he explained: “The teams love him, the other refs love him. He’s just a great guy!”

As part of his thank you the proud area manager also gave the star man in the middle a £100 voucher to enjoy a meal out but admits to one concern: “I know Dave,” laughed Rich “and I only hope he takes his wife out on of his rare nights off and not one of the other referees!”

Leisure Leagues Head of Refereeing Martin Cassidy added his thanks to Dave as he commented: “Our leagues wouldn’t exist without dedicated people like Dave, what he’s done is magnificent. “ Martin – a former top flight official himself – also wanted to pay tribute to a forgotten part of the referee team: “The support of their families must be welcomed too, especially with referees like Dave going out so often to help out everywhere. This award is for them too.”

The final word must go to the man himself, though and Dave, even after 10 years in the middle, has no plans to hang up his whistle yet: “I love it,” he says. “I look forward to doing it every week, and it’s been fantastic to see the leagues grow and to have helped in that. I reckon I can get to 1000 nights at least.”